Elvis Death Photo Billy Mann, one of Presley’s cousins, was paid $18,000 to secretly photograph Elvis lying in state at the Graceland mansion. The picture appeared on the cover of the National Enquirer. It immediately became its biggest-selling issue of all time. 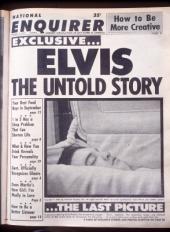 
Elvis", "Elvis Presley" and "Graceland" are Registered Trademarks of Elvis Presley Enterprises, Inc c) 1996 E.P.E., Inc. They are under full copyright. This is an educational nostalgia website operating under Fair Use Laws. All audio, photos and music files on this site are in & from the Public domain. They are for listening and evaluation purposes only and should not be used for commercial use.